A good story with a slide show.

“In January 2008, the Library launched a pilot project with the photo-sharing website Flickr to display publicly held photography collections. The site, called the Commons, offers the public easier access to collections housed in organizations such as the Library of Congress and the Smithsonian Institution, and, hopefully, gathers more details about specific images.”

The U.S. government policy on photographs and copyright is pretty straightfoward: photos produced by federal employees as part of their job responsibilities are “not subject to copyright in the United States and there are no U.S. copyright restrictions on reproduction, derivative works, distribution, performance, or display of the work.” 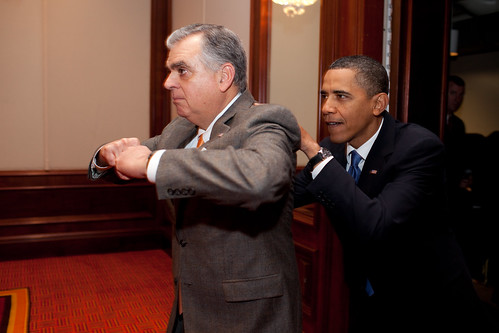 Please welcome the U.S. National Archives to The Commons, the world’s public photography archives on Flickr to which you can contribute information and knowledge.

With over 3,000 images in 49 sets uploaded already, perusing these important archival images should keep you entertained for a long time. Their four collections encompass important Americana, ranging from the famous Mathew Brady Civil War images to historical and iconic images of American history.

The American Historical Association blog has a nice, short writeup on Flickr: The Commons, where national and state government libraries (including the Library of Congress) are displaying photographs of historical interest.

Unfortunately, there are reports of layoffs at Flickr, including the head of the Commons project.