One giant leap for docs-kind: OSTI adds search for extracted figures and tables. 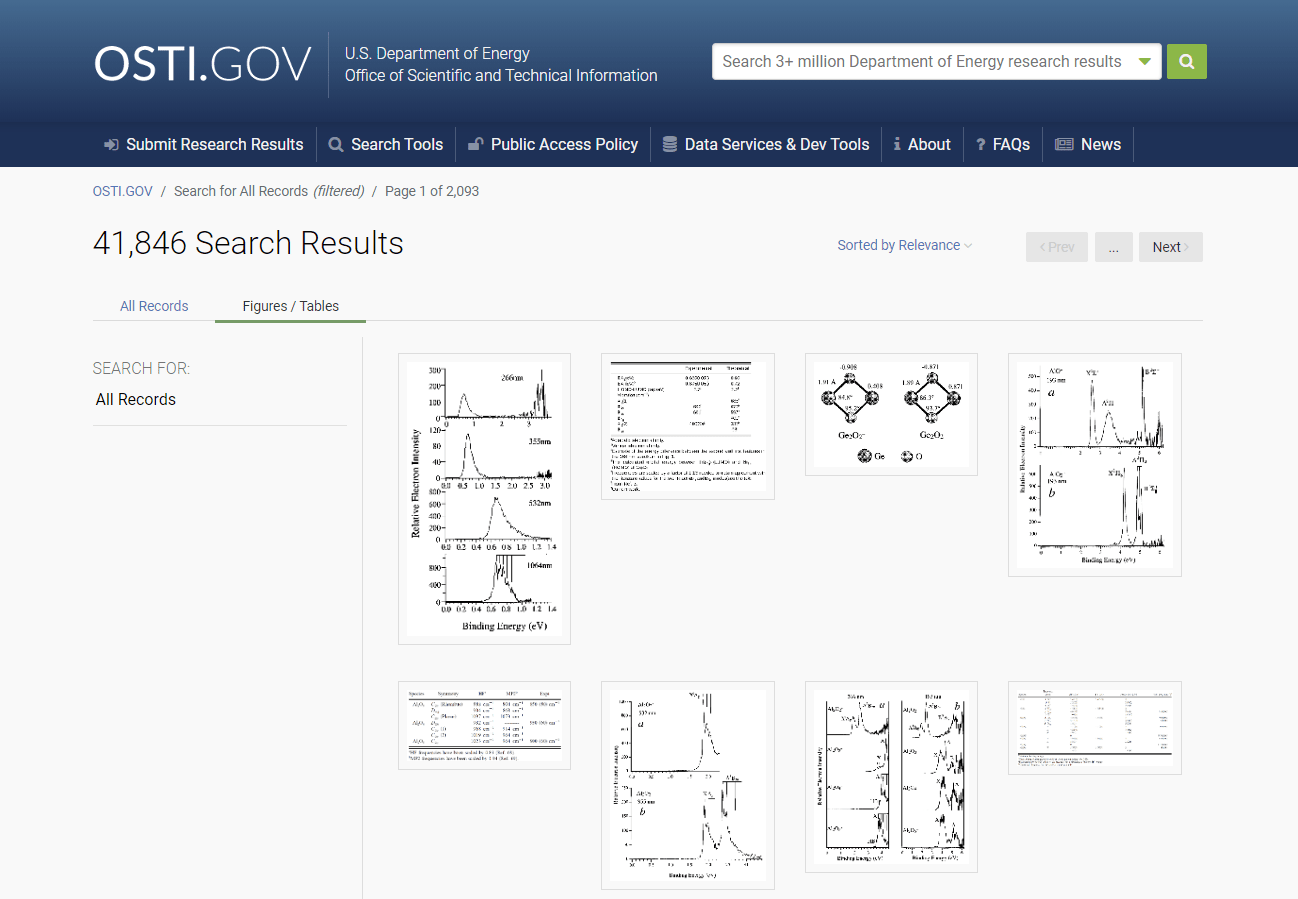 I’ve always appreciated the Office of Scientific and Technical Information (OSTI) for the way they manage and give access to .gov scientific information – and for the fact that they’ve long shared their metadata freely and allowed libraries to download their MARC records in bulk. Now they’ve added *another* feature to their search for which I’ve long wished; OSTI has added a figure and table search to their engine! Now if we could only get GPO to add this feature to GOVINFO. Imagine having a zanran-style search for tabular data and images in all govt documents?!

OSTI.GOV has introduced a search for figure and table images included in DOE’s collection of scientific and technical information.  This innovative new feature allows users to search for and retrieve documents as usual, but the associated images are also retrieved, and can be viewed with the corresponding document or in a separate tab for images only. Currently, over 5,000 documents have been mined for images, resulting in over 41,000 available for searching.

To populate and power this image search, relevant figures and tables are extracted from full-text documents using modified open-source software, and then the images and associated metadata are carefully curated in-house to make them findable at OSTI.GOV.  Emphasis has been placed on extracting visual materials from some of the newest full-text records in OSTI.GOV, specifically journal articles accepted manuscripts that have recently been released from embargo.

via Search and Display Extracted Figures and Tables in OSTI.GOV.

This is welcome news indeed! According to a press release yesterday, the US Geological Service (USGS) has just released its plan “Public Access to Results of Federally Funded Research at the U.S. Geological Survey: Scholarly Publications and Digital Data.” The USGS open access plan is in response to the Office of Science and Technology Policy (OSTP)’s 2013 directive on open access to scientific research (unfortunately, the release of the USGS plan was too late to be listed on OSTP’s January 29, 2016 memo to the Senate and House Appropriations Committees which listed the 11 agencies — plus 5 Dept of Health and Human Services sub-agencies! — which have published open access plans.)

Specifically, this plan requires that an electronic copy of either the accepted manuscript or the final publication of record is available through the USGS Publications Warehouse. Digital data will be available in machine readable form from the USGS Science Data Catalog. The plan will require the inclusion of data management plans in all new research proposals and grants.

While I’m all for “streamlining the collection and distribution of government information” as the title of S. 2206 “Let Me Google That For You Act” and it’s companion House bill H. R. 4382, doing away with the National Technical Information Service will do the opposite of that.

As we noted in our analysis of the GAO’s 2012 NTIS report and in our post in January 2014 when Senator Tom Coburn first floated the idea of getting rid of NTIS, Senator Coburn — and now Senator McCaskill along with him — “fundamentally misunderstands the Internet and misrepresents the case by stating that “elsewhere” to him is google and usa.gov, *internet search engines*! Doesn’t he realize that Google and USA.gov are simply pointing to NTIS, so if NTIS goes away, the reports that his staff found there will go away too.” Additionally, Federal agencies — not to mention the public! — sometimes need to pay for these reports because they’re copyrighted!

NTIS operates on a cost recovery basis because CONGRESS created it that way. It should also be noted that GAO’s conclusions — along with NTIS comments about the conclusions — are that 1) first and foremost, NTIS offers a valuable service of access to the federal scientific literature but 2) their current fee-based cost-recovery model is not sustainable. GAO did NOT conclude that NTIS should be dismantled.

As we said in our original analysis of the GAO report, We’ve got some better suggestions for how to handle critical technical reports published by the Federal government:

If you agree, please write to Senators Coburn and McCaskill and let them know how they can help assure public access and preservation of valuable scientific information!

S. 2206, the Let Me Google That For You Act, would eliminate the National Technical Information Service (NTIS), which is charged with trying to sell government report that are available online for free.

“This is the ‘let me Google that for you’ office of the federal government,” Coburn said. “Nearly all of the reports being sold are already available for free on other government websites, including my own.”

The senators cited a Government Accountability Office report saying the NTIS has lost at least $1.3 million during the last decade and runs a deficit on its document production.

“This agency has clearly outlived its usefulness,” McCaskill said. “I find it staggering that the agency is selling government reports both to the public and to other federal agencies that are widely available for free and easy to find with a simple Google search — and the agency is still losing money.”

McCaskill and Coburn said it should be a top priority for Congress to reduce spending and eliminate the unnecessary agency.

Research data lost to the sands of time

Here’s an interesting article, not on link rot (a topic FGI has been tracking for some time), but on *data rot*. In a recent article in Current Biology, researchers examined the availability of data from 516 studies between 2 and 22 years old. They found the following:

Librarians have known of this issue for years — the Inter-university Consortium for Political and Social Research (ICPSR) was set up in 1962 to tackle this — but it does put the issue in focus. And finally the federal government — via efforts like the NSF’s data management plan and OSTP’s new directive to improve the management of and access to scientific collections — is beginning to get behind the effort to improve on data rot. And many libraries — not to mention scientists and researchers — are beginning to struggle with the issue of data preservation. The issue is too big for just government information librarians to handle obviously. But this is fertile space in which govt information librarians, data librarians, research communities, and federal agencies can come together. The Federal policy stating the importance of data preservation is there, it’ll just take effort by multiple stakeholders to make sure it actually happens. It’s a positive that the writers of Dragonfly, the blog of the National Network of Libraries of Medicine Pacific Northwest Region — where I came across the article — point out that academic institutions can and should play a leading role in data preservation. I wholeheartedly agree!

The researchers found that for every year that had passed since the paper’s publication date, the odds of finding an email address that led to contact with a study author decreased by 7% and that the odds of turning up the data reduced by 17% per year.  The authors report that while some of the data sets were truly lost others fell more into the category of “unavailable,” since they existed, but solely on inaccessible media (think Jaz disk).  These findings will not come as a shock to those who have worked in a research lab.  This publication does put some tangible numbers behind the underlying message of NYU Health Sciences Library’s excellent dramatic portrayal of an instance of inaccessible data.  The authors conclude by suggesting that a solution to this problem moving forward can be found in more journals requiring the deposit of data into a public archive upon publication.  I would also suggest that academic institutions can take a role by establishing policies supporting research data preservation alongside providing a data repository.

The webcast for public comments on Public Access to Federally Supported R&D is happening today and tomorrow (14 – 15 May 2013), starting at 9:00 a.m EST. Here’s the agenda and already-submitted written statements. In a few days, the video archives from the webcast will also be available (same URL), and eventually the full transcript of the meeting will also be found on the same page. Check it out. It’s heartening to hear so many scholars, academics, policy wonks etc coming out in support of open access to scientific information and data.

This message is just a reminder that the Public Comment meeting on Public Access to Federally Supported R&D: Publications will occur tomorrow and Wednesday (14 – 15 May 2013), starting at 9:00 a.m. The agenda is attached.

The link to the webcast is on the front page of the agenda, but here it is again: http://sites.nationalacademies.org/DBASSE/DBASSE_083052

If you are interested, the written statements that were received as part of the registration process can also be downloaded from a link on that page. In a few days, the video archives from the webcast will also be available (same URL), and eventually the full transcript of the meeting will also be found on the same page.

We look forward to seeing all of you who will attend in person, and hope that those who watch by webcast find it a useful meeting.