Tag Archives: library of the year

Today our Federal Depository Library themed celebration of National Library Week focuses on the 2006 winner of the Government Printing Office’s Library of the Year Award. Here’s the citation from the award page: 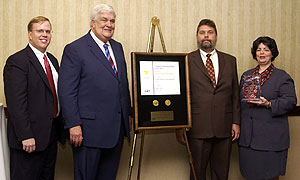 The U.S. Government Printing Office has selected Michigan’s Benton Harbor Public Library as the 2006 Federal Depository Library of the Year. Public Printer Bruce James presented the award to library officials October 22 at the annual Federal Depository Library Conference. In presenting the award, James commended the library for providing the residents of its community with online access to authentic published Government information. “I am honored to present this award to the Benton Harbor Public Library. Our partnership with the Federal Depository Library is an example of how GPO and local libraries can help communities across the country access authentic published Government information,” said James.

“I am especially glad to see the library using the far-reaching benefits of the Web to post Federal Government documents that residents can download electronically.”

Benton Harbor Public Library is in an economically challenged area and used limited funds to ensure Federal Government resources are used to their full potential. Michigan’s United States Senators are proud of what a library in their home state was able to accomplish.

“I commend the Benton Harbor Public Library staff not only for its commitment to providing citizens with access to a wide range of Government resources, but also for presenting these resources in a manner that so directly meets the needs of the community,” said U.S. Senator Carl Levin. 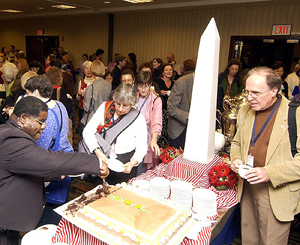 “Great things are happening because of great people in Benton Harbor. I’m so proud to represent them,” said U.S. Senator Debbie Stabenow. “This award is very special and very well deserved. I want to congratulate Fred Kirby, our great director of the library, and his staff.”

Michigan Governor Jennifer M. Granholm, in a letter congratulating the library on the award, noted that “the staff at Benton Harbor Public Library are showing your community how to navigate, use and ultimately leverage primary source materials where they can arguably do the most good and where — without the commitment of the library to offer such materials — they would otherwise be unavailable to many people. This award is a testament to your library staff’s passion for information and commitment to your community. On behalf of the people of Michigan, whom you serve so very well, please accept my congratulations and best wishes as you celebrate this much deserved recognition.”

Do you have a story about the Benton Harbor Public Library? Share it in comments!

Today our Federal Depository Library themed celebration of National Library Week focuses on the 2007 winner of the Government Printing Office’s Library of the Year Award. Here’s the citation from the award page:

Middendorf-Kredell Branch Library, in O’Fallon, Missouri, has been named the 2007 Federal Depository Library of the Year. Each year, the U.S. Government Printing Office selects one Federal depository library for its outstanding service to the American public and the promotion of Federal Government information. Public Printer Robert C. Tapella presented the award to Deputy Director Betty Murr at the Fall DLC Meeting and Conference held in Arlington, VA.

“It is an honor to present the library with this award. The Middendorf-Kredell Library has demonstrated great leadership in the ever changing digital age by creating an online forum twelve years ago for the public to access Government information,” said Public Printer Robert C. Tapella.

A selective Federal depository library since 1990, Middendorf-Kredell Branch Library is part of the St. Charles City-County Library District. Their creativity and innovation has led to the development of various programs that readily and easily bring Federal information to a very broad base of the local community.

“A well-informed electorate is indispensable to the American form of government. You and your staff have established a standard of excellence that will not soon be eclipsed, and in doing so, you have also strengthened the very foundations of the freedoms that we now enjoy. Congratulations on your fine work!”, said Congressman W. Todd Akin.

Middendorf-Kredell was among the first Federal depository libraries to establish an online Web site to enhance their ability to reach the public. This includes their creation of “Uncle Sam for Kids”, which was the first of its kind in the country to help kids obtain Federal information for school assignments. Their Community & Market Analysis program has been successful in providing a free, customized analysis for any address for businesses interested in relocation or expanding in the area. Additionally, Anne Sylvan, information resource manager for documents at the Middendorf-Kredell Branch, developed a protocol to directly batch-upload government documents, instead of sending them out to a third party to be catalogued. Last year, the library uploaded 18,500 electronic government records. Library patrons can search the records by author, title, subject or keywords.

“We’re certainly not the largest depository, so I like to think that our recognition is tied to our strength of getting library services out to the broader community,” said St. Charles City-County Library District Director Carl R. Sandstedt. “We have tried for years to “knock” the walls out of our buildings and push services throughout the area. We are simply much more proactive in the delivery of services than most public libraries.”

Do you have a story about Middendorf-Kredell? Tell us about it in comments!

Today our Federal Depository Library themed celebration of National Library Week focuses on the 2008 winner of the Government Printing Office’s Library of the Year Award. Here’s the citation from the award page:

The U.S. Government Printing Office (GPO) is pleased to announce the Law Library for San Bernardino County, California, as the 2008 Federal Depository Library of the Year. The GPO bestows this honor on a Federal depository library each year for its outstanding service to meet the Federal government information needs in the library’s service area; creativity and innovation in developing community programs for the use of Federal government information; and leadership in creating public service programs that can be emulated by other Federal Depository Libraries.

The presentation of the award took place at the Fall Federal Depository Library Conference in Arlington, Virginia.  Participants in the award ceremony included Public Printer Robert C. Tapella; Richard G. Davis, the Acting Superintendent of Documents and Director of Library Services and Content Management; Lawrence R. Meyer, the Director of the Law Library for San Bernardino County; and Keith D. Davis, the President of the library’s Board of Trustees.

“The Law Library for San Bernardino County has done an outstanding job of providing the public access to the documents of our democracy,” said Public Printer Robert C. Tapella.  “For nearly 200 years, depository libraries have safeguarded the public’s right to know and are one of the vital links between the public and its government.”

With three locations, the Law Library for San Bernardino County is a selective Federal depository library that serves the largest county in the United States.  It encompasses the main library in the City of San Bernardino, as well as branches in the cities of Rancho Cucamonga ands Victorville.  The library has a lengthy record of public service and outreach.

Also, the staff conducts public outreach activities by extensively promoting law library materials and services to both the legal and non-legal communities.  Additionally, the staff consistently surveys library users, which enables them to sustain an open relationship with the members of the community they serve.

“We are deeply honored and privileged to receive the award,” said Lawrence R. Meyer, Director, Law Library for San Bernardino County. “We appreciate its significance to the depository community and the recognition the award conveys specifically to the Law Library for San Bernardino County as well as the recognition it places upon all Law Libraries that participate in the FDLP as selective depositories or through shared housing arrangements. In particular this award emphasizes the importance of publicly accessible county law libraries to the FDLP.”

Do you have a story about the Law Library for San Bernardino County? Please share in comments!

Today our Federal Depository Library themed celebration of National Library Week focuses on the 2009 winner of the Government Printing Office’s Library of the Year Award. Here’s the citation from the award page:

“The Oklahoma Department of Libraries should be commended for their efforts in providing training, education and awareness to Government information resources and how to use them,” said Public Printer Bob Tapella. “Federal depository libraries have provided openness to the documents of our democracy since the early 1800s and are a vital link between the Government and its citizens.”

“It’s quite an honor to receive this award, and it’s a tribute to Steve Beleu and Cliff Broadworth in our U.S. Government Information Division,” said Susan McVey, Director of the Oklahoma Department of Libraries. “Since 2003, the division has delivered nearly 200 library workshops to the people of Oklahoma, with occasional sessions in neighboring states. The division also tailors the workshops to highlight federal information relevant to particular communities, and that can make a big difference since it’s all about connecting citizens with their government and its services.”

ODL provides Federal Government information to people throughout the entire state of Oklahoma. As one of two regional libraries in Oklahoma, they are proactive and supportive of the libraries they serve in the state, providing excellent service, training and on-site visitations. Officials at ODL have conducted workshops for library staff in all types of libraries in the state by teaching them how to provide their patrons with access to Federal Government information resources. In addition, ODL works with staff from Federal agencies to provide librarians with the latest information from agency Web sites and databases. Recently, ODL conducted a workshop for new employees in the U.S. Census offices throughout Oklahoma regarding information about U.S. Census.

Do you have a story about the Oklahoma Department of Libraries? Please share in comments!

Today our Federal Depository Library themed celebration of National Library Week focuses on the 2010 winner of the Government Printing Office’s Library of the Year Award. Here’s the citation from the award page:

“The Johnson County Library is honored to be awarded Library of the Year by the GPO,” said County Librarian Donna Lauffer. “We find that Government documents are a valuable tool for the public in that they are free and reliable information. The public views all forms of Government as one and the same. Our library works to raise the public’s awareness by being relevant to their everyday information needs. Raising awareness of the importance of an open Government moves everyone forward in these difficult economic times.”

Note: No award was given in 2011.
Do you have a story about the Johnson County Library? Please share in comments!