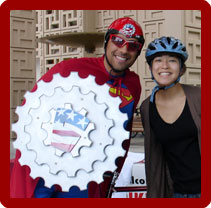 [Editor’s update may 18, 2018: Sprocket Man popped up again yesterday on the Govt Documents Round Table facebook page in a discussion about favorite govt documents. Someone mentioned S-Man and gave a link to a nice writeup about his origins.]

Recently while walking to the shuttle on Stanford campus, I saw a sign with the Superhero Sprocket Man, a much loved government document comic book character (Y 3.C 76/3:2 SP 8/994) — it’s listed on FGI’s Best Titles Ever! page — at a table being jointly run by Stanford Parking and Transportation Safety (P&TS) and the Stanford Medical School out promoting bike safety as they do every friday afternoon.

As a government information librarian at Green library, I was chuffed because Sprocket Man — or so I thought — comes from a 1994 government document published by the US Consumer Product Safety Commission (CPSC). However, the friendly folks at the table told me that Sprocket Man was actually drawn by a Stanford pre-med student named Louis Saekow in 1975 as was reported in the Stanford Report in 2002.

So now I’m wondering how a 1975 comic book copyrighted by Stanford becomes a 1994 government document? Did Mr Saekow give the comic to the CPSC? Did CPSC simply appropriate the comic for their own use without giving Mr Saekow credit? I’m intrigued because I’ve often seen public domain government information repackaged and sold, but this is the first instance I’ve seen of copyrighted content becoming a government document.

Check out both editions of Sprocket Man and see for yourself:

If anyone has further information, please leave a comment. Otherwise, I’m on the case and will report back when I get to the bottom of this mystery!